1. Kochi's Yosakoi Festival to take place for the first time in three years.
This year's Yosakoi Festival will be a two-day event taking place in Shikoku's Kochi city. As many as 6,500 dancers in colorful and elaborate costumes will parade through the city to the rhythm of their naruko castanets. In addition to traditional music, the festival features rock bands and other more modern music genres, with performers sporting flamboyant hairstyles and costumes, and inventive choreography that will wow onlookers.
Yosakoi Festival 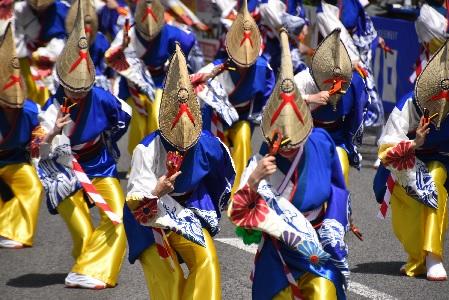 2. The "Fire Festival of Yoshida", a festival celebrating the end of the Mt. Fuji climbing season.
Hailed as one of Japan's Three Most Unique Festivals, the Yoshida Fire Festival is an autumnal festival held every year on the 26th & 27th August at two shrines at the base of Mount Fuji. The festival marks the end of the Mount Fuji climbing season, and over the years it has mesmerized spectators from far and wide with its towering torches set ablaze along the main thoroughfare in the heart of Fujiyoshida city.
Yoshida no Himatsuri

3. TOWER SLIDER, an interactive attraction, opens at Tsutenkaku, a registered tangible cultural property.
The symbol of Osaka, Tsutenkaku's new attraction "TOWER SLIDER" is a 60-meter-long slide wrapped around the outside of an elevator tower, down which the adventurous can slide from Tsutenkaku Tower's third-floor observation deck to its basement floor in about 10 seconds. The slide is safe even in the event of an earthquake, and the transparent heat-shielding polycarbonate ceiling panels allow people to look up at the tower as they descend.
Tsutenkaku TOWER SLIDER (available in multiple languages)

5. Pre-Opening of Niseko's Luxury Hotel "Setsu Niseko" on August 12.
A new luxury hotel, Setsu Niseko, will pre-open on August 12th in Hokkaido. It will be the newest and largest full-service hotel in the Niseko area and, nestled between two mountains, this all-season resort will offer spectacular views of the famous Mount Yotei and the picturesque Niseko Annupuri region. Its grand opening will be in December 2022.
Setsu Niseko

Please note the above details are correct as of the time of publication, and may be subject to change.