Prior to the outbreak of the COVID-19 pandemic in early 2020, the number of overseas visitors to Japan had been increasing steadily year-on-year, quadrupling from around 8 million in 2012 to 32 million in 2019. This growth was in line with the government's original target of attracting 60 million overseas tourists annually by 2030. However, the rapid increase in visitor numbers was starting to overwhelm popular destinations such as Kyoto; this led to calls for a shift from quantity tourism to quality tourism and for the adoption of more diverse approaches when promoting Japan's attractions.

The pandemic and the subsequent plunge in overseas visitor numbers gave the government an opportunity to rethink its strategy. In May 2020, a new law was enacted aimed at promoting tourism that would deepen understanding of the country's culture. A particular focus was the upholding and revitalizing of ancient traditions and cultures in more remote areas of the country. These are under threat owing to the depopulation of regions outside major cities, and the resulting shortage of people able or willing to maintain them.

The new law calls on facilities such as museums to offer visitors more insights into the cultural and historical background of their exhibits and to provide information on these in an accessible and easy-to-understand manner. The aim is not just to make Japanese culture more accessible to overseas tourists; it is also to boost awareness of the culture of local areas among their residents in order to deepen their attachment to them and promote regional revitalization.

This increased engagement of residents in the history and culture of their own area is seen as a key factor in the success of regional revitalization in Japan. It goes under the name of "jibungoto" (自分事), which loosely translates as "something that concerns me". The aim is to create a network of standard bearers among local populations who promote the culture of their own area.

The new strategy of leveraging public facilities to boost economic activity is not without its challenges. Museums and other cultural centers in Japan have traditionally been seen as educational facilities, not as a means of generating revenues or profits. Admission to many of them is free. The objective is therefore to encourage collaboration between cultural sites and the tourism sector-public/private sector partnership, in other words.

The aim is also to ensure that the spillover economic effects of tourism are reinvested in local communities and in the promotion and retention of their individual cultures. The resulting increase in the attractiveness of the region then boosts the economy - a virtuous circle.

Here are some examples of cities and facilities that are embracing this new approach.

Located on the coast of the Sea of Japan, the city of Kanazawa is at the forefront of the promotion of cultural tourism. Its Prefectural Museum of Art is one of the oldest regional museums in Japan.

Spacious galleries on the second floor house an extensive array of fine art and crafts from the surrounding areas: kutani-yaki ceramics, kaga lacquerware, dyed silk kimonos, Buddhist scrolls, swords, screen paintings, and sculptures, including local cultural assets and works by local artists and craftspeople. The collection spans five centuries and includes antiques as well as contemporary and modern art from the 20th century. 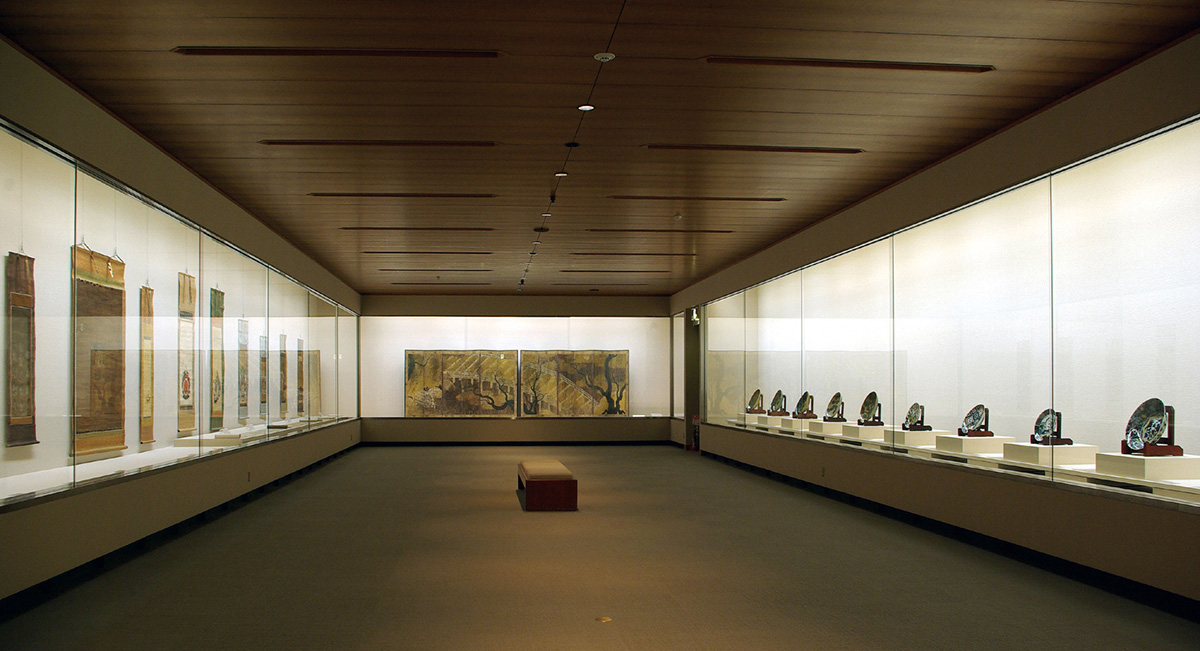 There is also a gallery housing antiques that belonged to the Maeda family, wealthy samurai nobility who ruled the Kaga domain for over 200 years. Corresponding roughly to present-day Ishikawa and Toyama prefectures, Kaga was one of around 250 relatively autonomous domains under the ultimate authority of the shogun in Edo (now Tokyo), and one of its wealthiest; its leaders were high-ranking officials in the shogunate.

During the Edo period (1603-1868), the Maeda family protected and fostered Noh as an official form of entertainment for the warrior class, and in more modern times it has become an art form widely enjoyed by the general public. At the Kanazawa Noh Museum, you can see Noh masks and costume masterpieces, and learn more about Noh through an augmented reality (AR) facility. 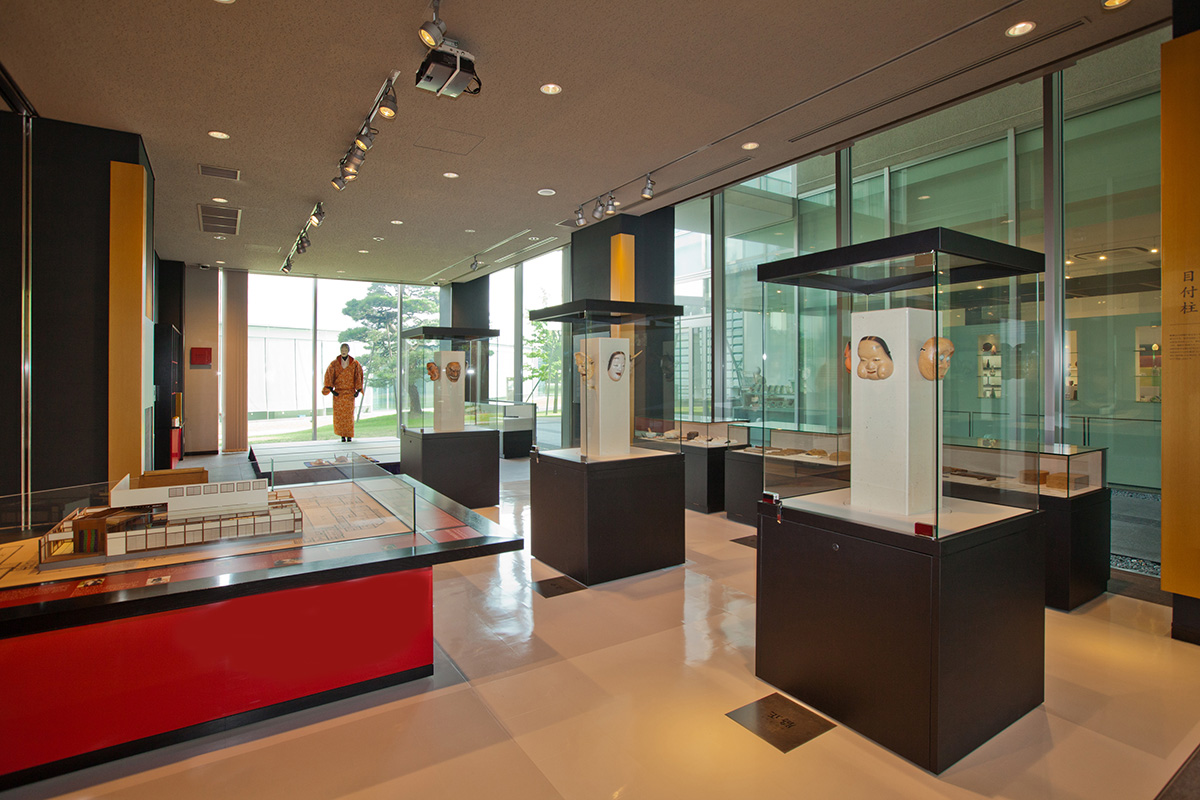 Kanazawa's National Crafts Museum is similarly dedicated to preserving and promoting contemporary Japanese and foreign crafts and designs. Originally established in 1977 as part of the National Museum of Modern Art in Tokyo, it was relocated to Kanazawa in 2020 as part of the Japanese government's policy of revitalizing local areas. The museum's collection includes woodwork, bamboo work, metalwork, glassware, ceramics, as well as lacquer crafts, dolls, and dyed and woven textiles. Exhibitions are held based on specific themes. 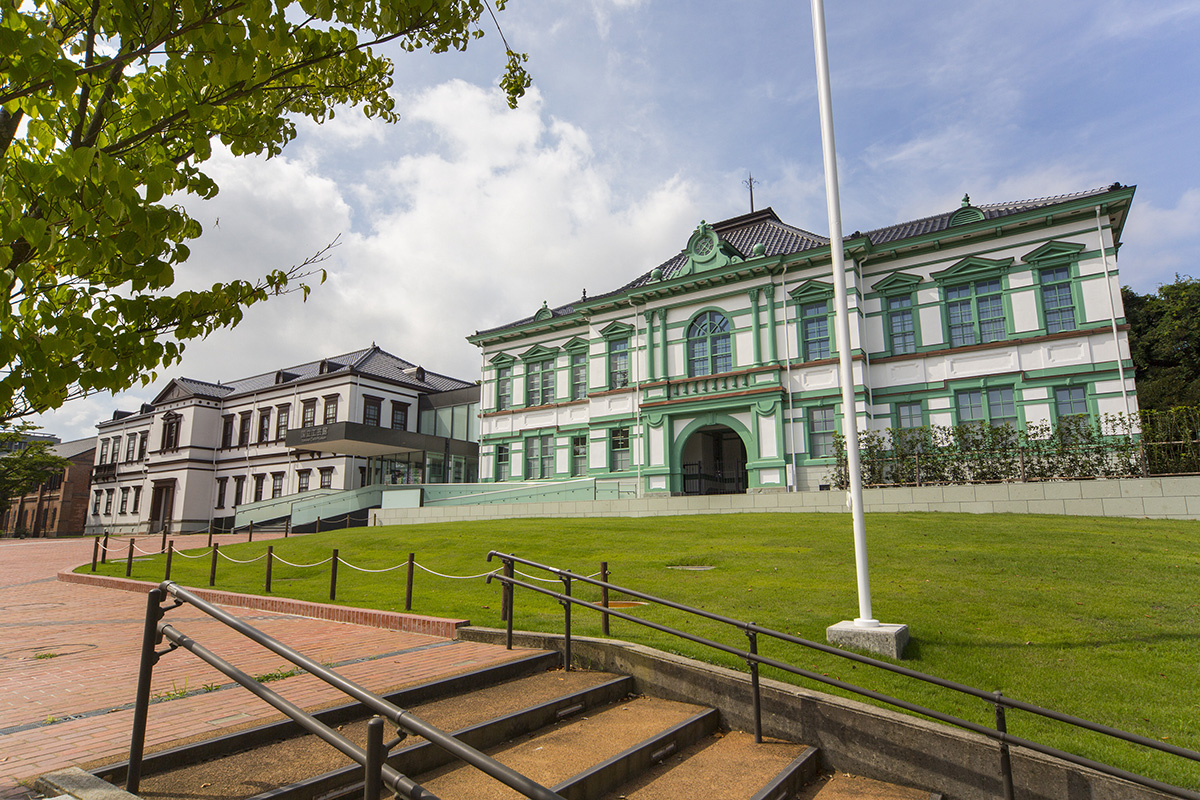 Visitors are invited to not just view the exhibits; in the "Welcome to the World of Crafts" section they can learn about crafting techniques and terminology, which helps to deepen their understanding and appreciation of them. A 3D viewing facility provides a 360-degree panorama of selected examples of the museum's collection.

An imposing castle was constructed in Hikone city at the beginning of the 17th century in the early years of the Tokugawa shogunate, which ruled Japan from 1603 until the Meiji Restoration in 1868. Tokugawa gave the area around Hikone as territory to his trusted general Ii Naomasa and the castle was built following his death. The Ii clan subsequently served in many important positions within the Tokugawa shogunate. 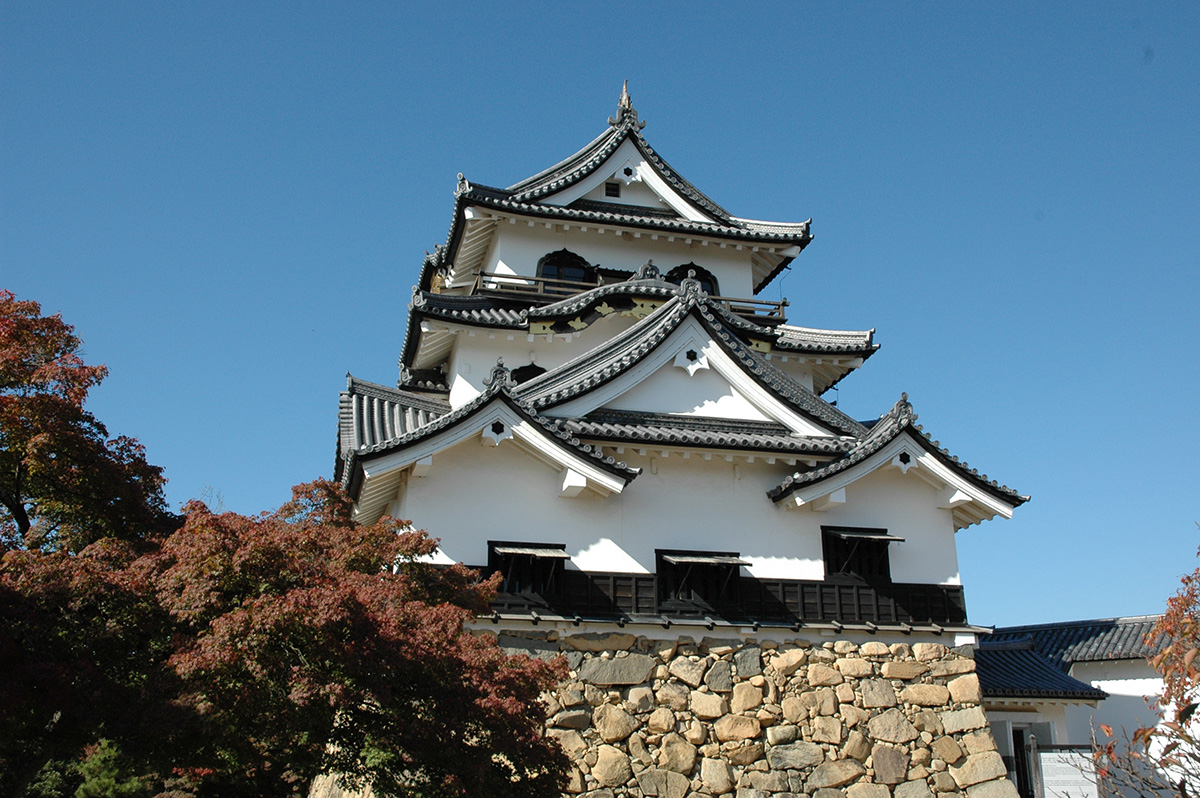 The castle was originally situated on the shore of Lake Biwa, but owing to land reclamation in the intervening years, it is now around one mile inland. Strategically, the castle was a vital facility in protecting the nearby capital of Kyoto and served as a military base for the Edo Shogunate in the western part of Japan. It was also a key point on the Nakasendo highway, a major transportation route between Edo (modern-day Tokyo) and Kyoto.

Following the Meiji restoration in the middle of the 19th century, the new government ordered the dismantling of all feudal-era fortifications nationwide. However, Hikone Castle was spared by a direct request from the emperor Meiji himself after he had visited the area. This ensured that the castle was retained intact, and today it remains one of the best-preserved castles in Japan, with many of its buildings designated as Important Cultural Properties.

A museum was opened on the site in 1987; its main building is a reconstruction of what was once a nobleman's residence. Hikone was a prosperous town where culture and traditions were fostered; the Ii family handed down a great number of art objects, craft works and historical documents from generation to generation, many of which are now housed in the museum. The overall collection comprises more than 45,000 items, ranging from arms and armor (typical of a warrior's household) to various types of art objects including calligraphy, paintings, Noh masks and costumes. A visit to the museum allows visitors to really feel the feudal culture that flourished during the Edo period.

Nagasaki was one of Japan's few windows to the world during the country's 250-year period of isolation from the world, which ended in the middle of the 19th century. The Meiji Restoration saw Japan re-open its doors to foreign trade and re-establish diplomatic relations from around 1870; Nagasaki once again became a key port and modernization of the city began in earnest.

Nagasaki Museum of History and Culture is one of the few museums in Japan dedicated to depicting the country's international exchanges during the Edo period. The Museum holds an extensive collection of historical documents, art and craftworks that tell the story of Nagasaki's fluctuating fortunes. 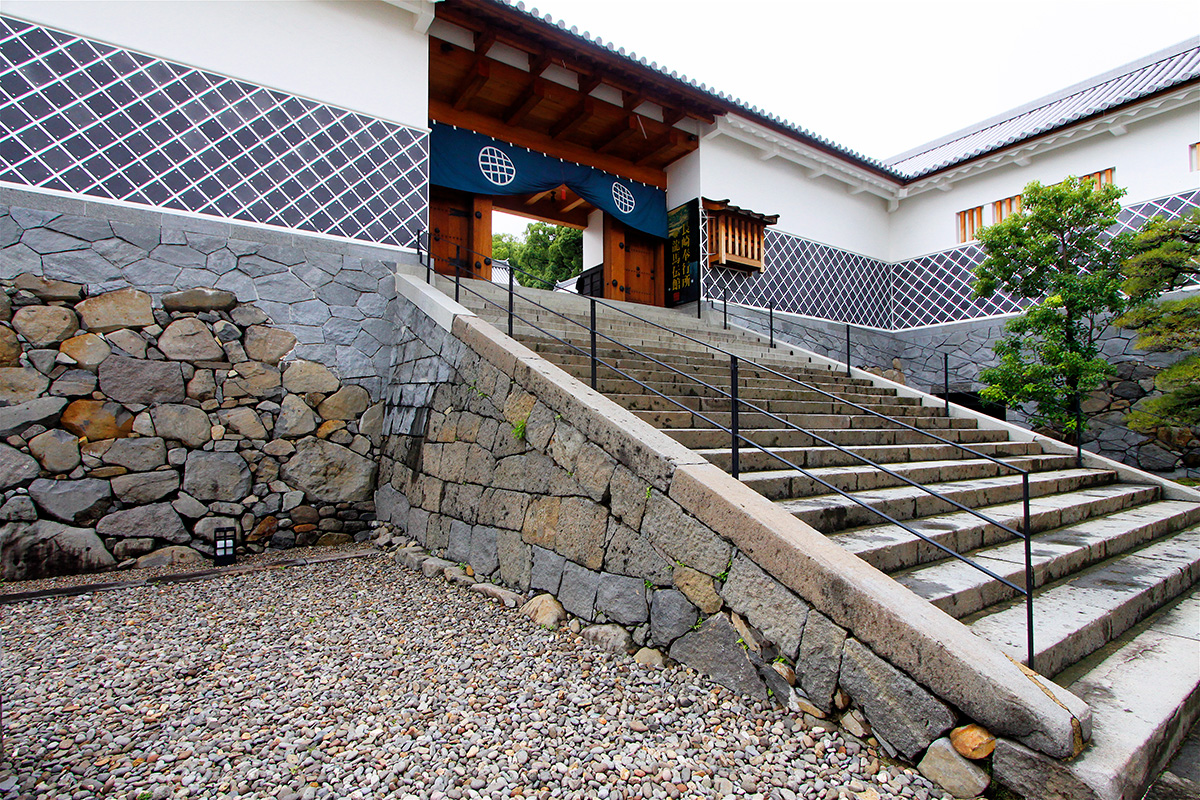 Images on folding screens depict the arrival in the 16th century of the first Europeans in Japan. There are also models of the overseas ships that called at Nagasaki harbor during that period, including Dutch vessels, Chinese junks and steamships.

Nagasaki also saw some of Japan's earliest implementations of Western-style architecture and was home to many of the country's early Christians. The city's Oura Church, built during 1853-64 soon after the end of Japan's period of seclusion, was designated as a national treasure in 1993, and was for many years the only Western-style building in Japan with this distinction. It is believed to be the oldest remaining Catholic church in the country. Exhibits in the nearby museum testify to Nagasaki's role in the origins of Christianity in Japan and the persecution its followers faced following the clampdown on the faith by the powerful feudal lord Toyotomi Hideyoshi.

These are just some of the examples of the many sites and initiatives focused on disseminating and protecting Japan's culture and traditions. Mass tourism has traditionally been seen as a threat to a country's culture and heritage; if these initiatives are successful, it will be seen more as an opportunity to protect these in Japan.