Experience Authentic Japan Through the Diverse Cuisine of Its Regions - JNTO

For many travelers, experiencing local cuisine is one of the highlights of a trip away from home. A survey by the Japan Tourism Agency in 2019 revealed that eating Japanese food and tasting Japanese saké were among the activities prospective visitors to Japan looked forward to the most.

The decline in hunting activity in Japan coupled with the growing amount of abandoned land in the countryside has boosted the wild animal population, resulting in increased damage to crops in cultivated areas. Accordingly, a nationwide movement to utilize game animals such as deer and wild boar as sources of food is gathering support, with the French word gibier now commonly used by the Japanese to refer to the meat of hunted wild animals.

The Nishi-Awa region, in a mountainous area of Tokushima prefecture in Shikoku, is well known for its ancient hillside farming methods and the coexistence of its people with nature. The region's communities are striving to mitigate the damage caused by wild animals by promoting their meat as a tourist attraction.
The Uribo minshuku lodge offers guests gibier dishes, and in wintertime they can even try their hand at hunting. The owners take the opportunity to educate their guests about the agricultural lifestyles of the region.

The Hida area in Gifu prefecture is famed for its Shirakawa-go UNESCO World Heritage site. Takayama city has received a full three-star rating from the Michelin Green Guide Japan for its old town landscape, featuring wooden buildings reminiscent of the Edo period. Quality rice is cultivated in the area, which is also blessed with a rich supply of mountain water; these are combined to produce fragrant saké. In Takayama city, there are seven saké breweries located within a 100-meter radius, including Hirase, the city's oldest, which has been producing saké since 1623; tourists can visit these and try some saké while strolling around the historic streets. Hida is also famous for its Hida Beef, which visitors can enjoy washing down with some of the local saké. 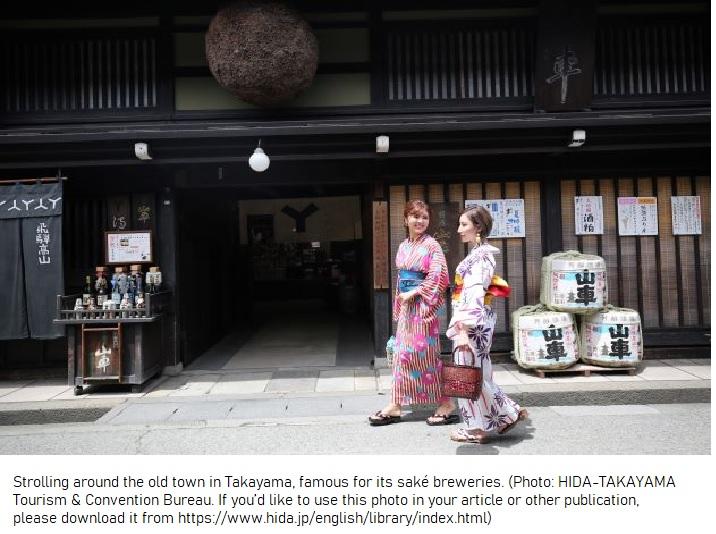 In Gero, just 60km south of Hida Takayama, lies the small remote village of Maze, considered by many to be one of the most beautiful in Japan. The river Maze which flows through it is teeming with ayu (sweetfish), which are found only in the cleanest rivers and streams. Designated as a hub for 'green' tourism, the village's Nishimura district offers programs that allow visitors to experience an authentic rural lifestyle through guided tours and hands-on experiences including fishing and cooking. Tasting freshly caught sweetfish is an ultimate pastime across much of Japan's countryside!

Nara prefecture, the ancient political and religious heart of Japan, will host the 7th UNWTO World Forum on Gastronomy Tourism in June 2022. This event aims to promote exchange and collaboration between experts in tourism and gastronomy, with attendees sharing best practices and promoting gastronomy tourism as a contributor towards sustainable development.

With more than 1.4 million diverse food outlets across the country's 47 prefectures, from restaurants offering contemporary cuisine to farmhouse diners, overseas visitors to Japan can enjoy a journey of endless culinary discovery!