Overseas visitors to Japan have tended to spend most of their time touring the major cities and visiting historical sites like Kyoto or areas of natural beauty such as Nikko. Recently, a growing number are showing more interest in getting off the beaten track when they travel again and exploring the culture and history of the country. One area of particular interest is Japan's farming communities.

Historically, agriculture played a major role in the Japanese economy and society, but the number of households engaged in farming and the contribution of agriculture to GDP have steadily fallen over the past 30 years. An growing number of the remaining farming households earn income from other sources.

There is therefore interest in preserving what's left and ensuring that farming traditions survive. One way is through farming-related tourism, which is now being actively promoted by the national government and local authorities across Japan. Domestic and overseas visitors are being offered the chance to stay in agricultural, mountain, or fishing villages amid local landscapes that have changed little over the centuries.

This allows them to experience traditional rural Japanese lifestyles and to interact with local people, at the same time boosting local economies. There is a vast array of lodging options to choose from, including farmhouses and old residential properties. Meal offerings draw on rich local resources from the land and sea.

These programs can also provide a wonderful learning opportunity for students from around the world visiting Japan on educational trips. And in Japan itself, in the wake of the COVID-19 pandemic there is growing interest among urban dwellers in remote working and in life away from crowded city centers. A farm stay provides the chance for them to experience life in the countryside before making a commitment.

Rather than just provide short-term support, the farm stay program aims to help establish a sustainable long-term business model through collaboration among different stakeholders in the region - a business that benefits the whole region through the use of local resources, such as locally grown foodstuffs.

Here are some examples of programs and activities built around farm stays in Japan.

Yamakoshi is a picturesque mountainous region close to the Japan Sea coast. Its famous terraced rice fields, carved out of the area's numerous mountainsides, attract photographers from all over the country. 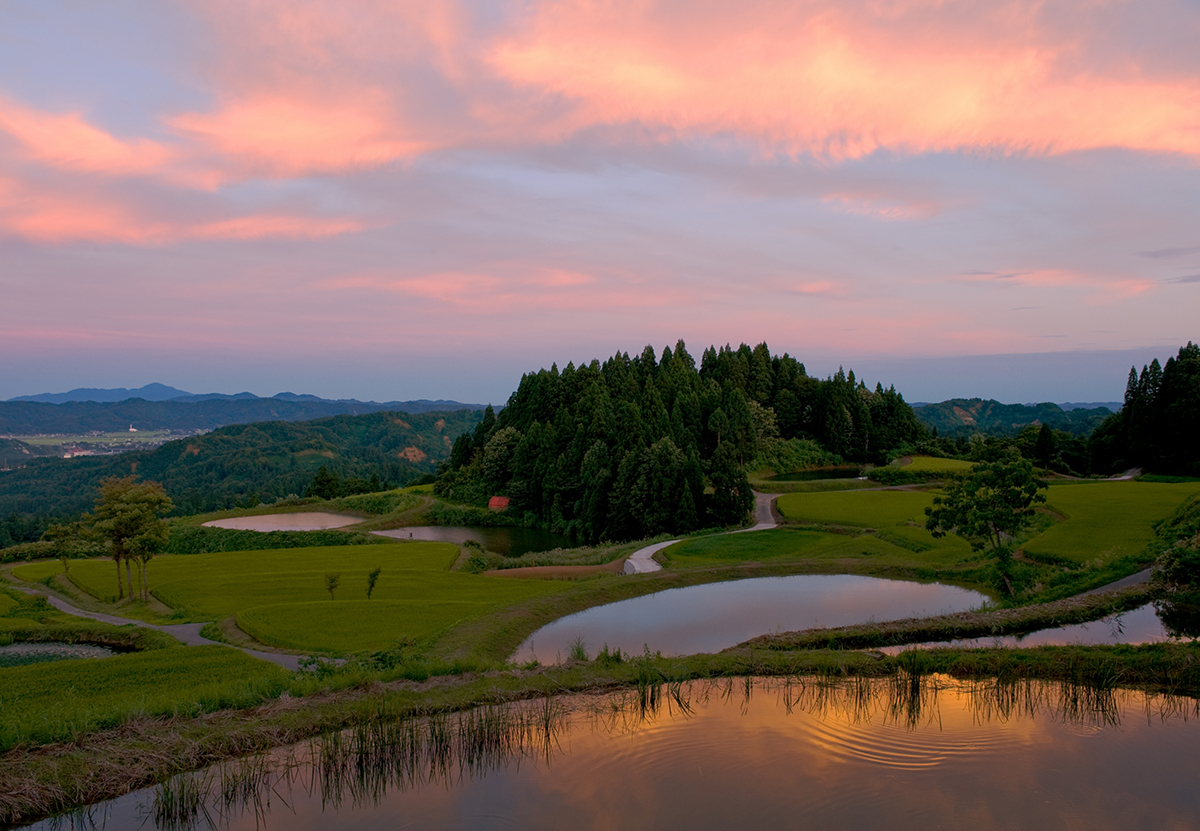 Yamakoshi experiences some of Japan's heaviest snowfall, and during the winter months, more active visitors can enjoy a kanjiki snow-trekking tour wearing snowshoes. The severity of the winter weather has given rise to a number of unique crafts and other practices, such as the use of snow to freeze and store food and the use of straw for insulation and general construction. 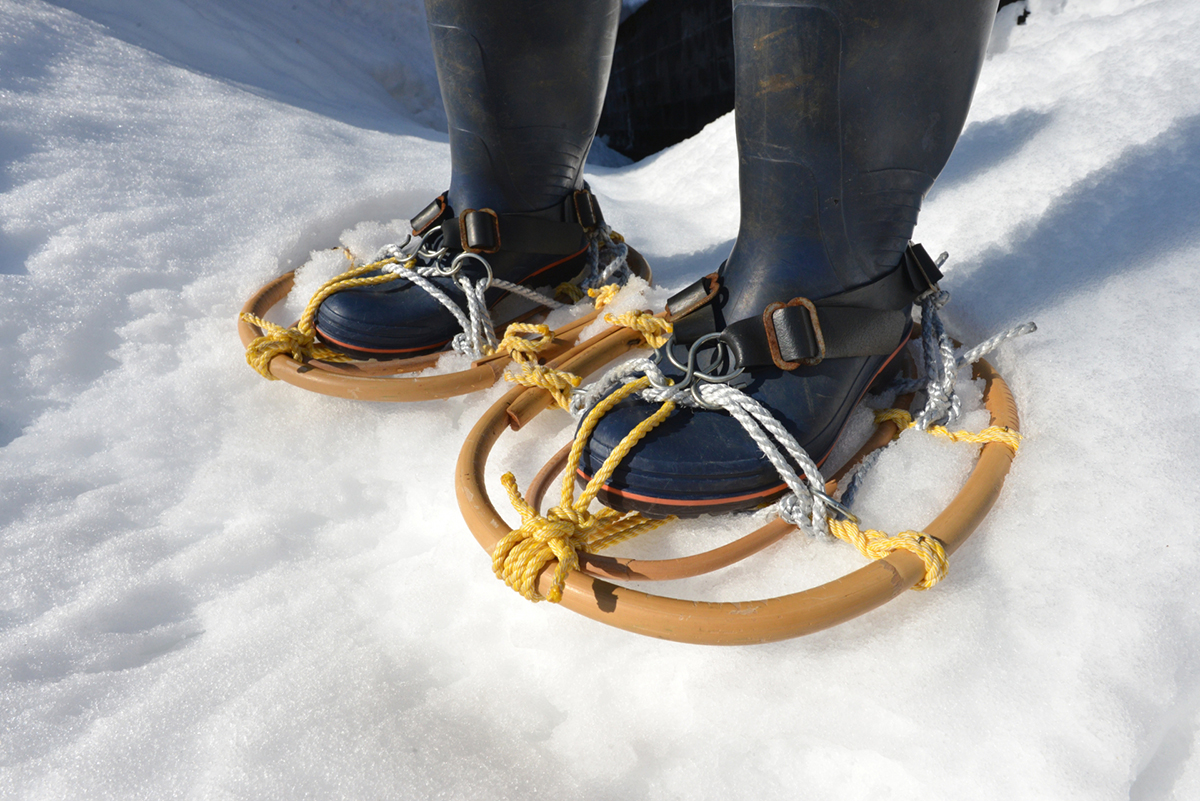 A number of programs encourage visitors to not just enjoy the local food of the region, but to learn how it is produced. Yamakoshi is renowned for its production of soba - noodles made from buckwheat flour. Visitors can watch local chefs as they create soba and learn the importance of using exactly the right proportion of flour - and they can naturally enjoy tasting the results!

In a similar vein, visitors can try their hand at pounding and shaping mochi - glutinous rice - in traditional shaped vessels using a large wooden hammers.

Yamakoshi is additionally known as Japan's number one breeder of the distinctive and symbolic nishikigoi carp. Originally black in color and bred as a food source, carp with bright crimson colorings began to evolve, and the fish were subsequently bred largely for ornamental purposes. Many temples and dwellings now feature ponds teeming with colorful nishikigoi. The Yamakoshi farm stay program includes guided tours of local carp farms where visitors can see how the fish are bred.

Located in the mountainous northern part of Kyoto prefecture, Fukuchiyama and Ayabe are historic old country towns a world away from the busy urban bustle of central Kyoto. 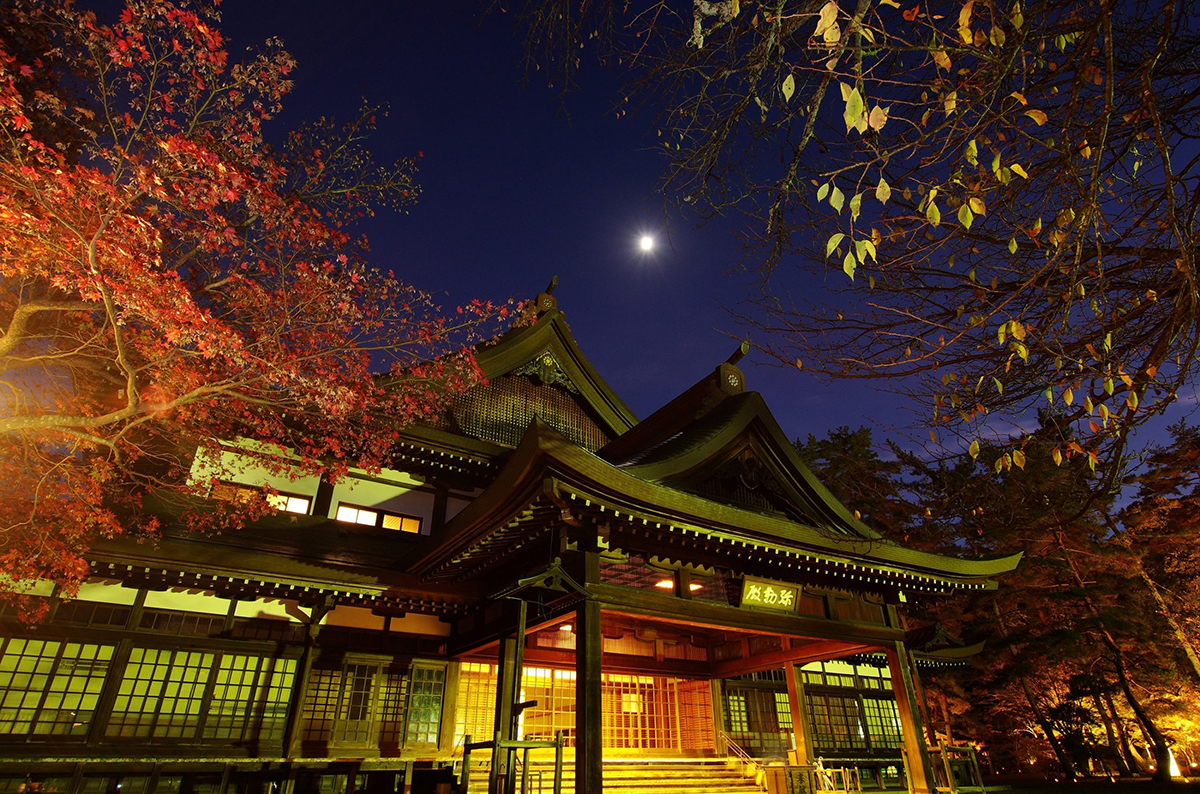 Fukuchiyama grew around its castle, which sits prominently on a small hill and features timber framework, white walls and an ornate tile roof, a prominent reminder of the town's roots. Visitors can not only tour the castle; they can make a grand entrance dressed in samurai armor - an unforgettable experience that will transport them back in time!

Fukuchiyama is also home to a majestic Shinto shrine, one of Japan's oldest. Surrounded by forest in the countryside outside the town, Moto Ise Naiku Kotai Shrine has existed for more than 2,000 years. The thatched-roofed main hall is surrounded by towering Japanese cedars.

A guesthouse in neighboring Ayabe offers accommodation in a charming old farmhouse in a picture-perfect setting, with tatami mats, futons, and cozy kotatsu heated tables to warm up under on colder evenings. The owners prepare hearty meals in their open kitchen, served with generous helpings of home-grown vegetables and other local ingredients. After breakfast the following morning, guests can walk with them to theifr small field to help harvest some azuki red beans.

Ayabe developed as a production center for silk; today the rural landscape is dotted with the high-peaked roofs of country homes offers numerous trekking routes and views of scenic temples.

The town features a small sake brewery founded nearly 100 years ago, which prides itself on producing quality Japanese sake every winter, with the head of the company personally serving as brewmaster. Among the collection of retro bottling equipment and old tools, visitors can learn some of the basics of sake brewing and its key ingredients, including polished rice.

The small city of Izumi in Kagoshima prefecture in Kyushu features a wealth of cultural, culinary and other attractions, including beautifully preserved samurai residences and the migration grounds of cranes on their winter sojourn from Siberia. 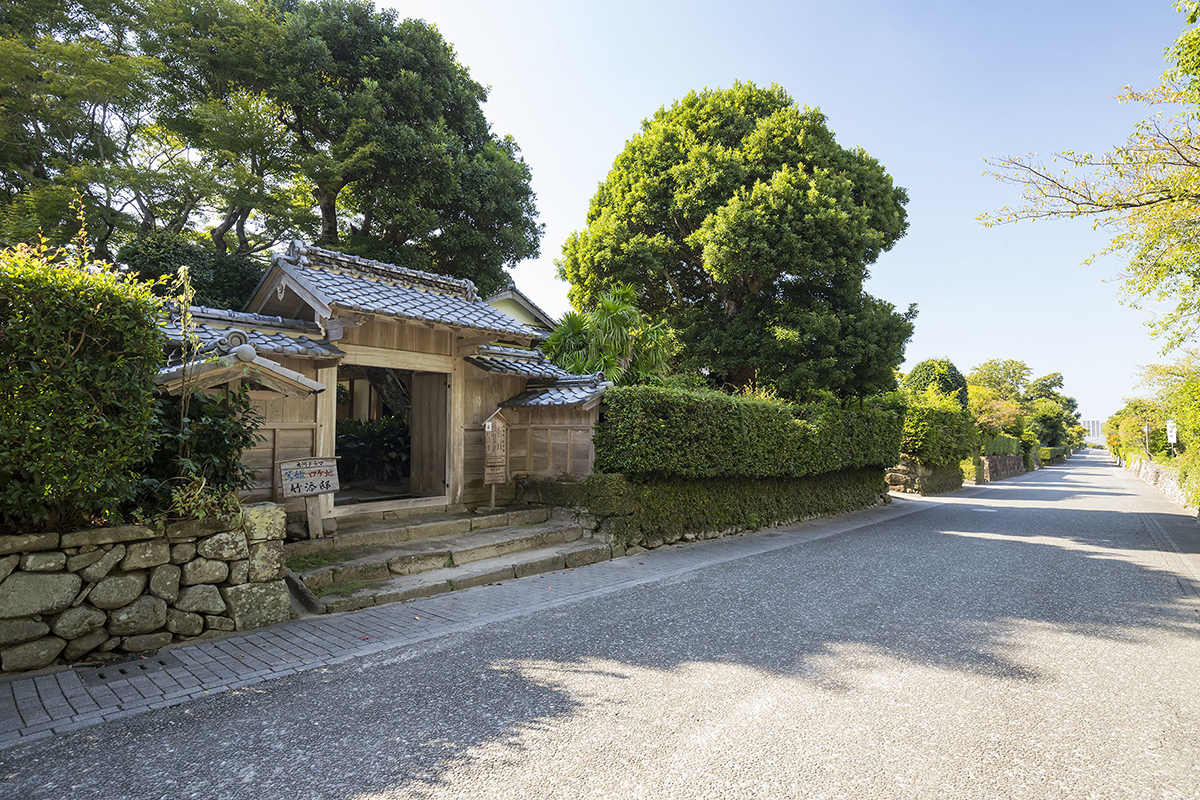 A small number of local farming families in Izumi open their doors to travelers under the farm stay program. One such residence is Euchi Shizen Chiyu-no-sato, operated by a retired couple who run the farm, producing and preserving a range of Japanese vegetables and other foodstuffs, many of which are little known outside of Japan. An open kitchen adjoins an airy living and dining area featuring a traditional irori sunken hearth where guests enjoy local specialties as dishes simmer over the fire.

Izumi is also famous among birdwatchers around the world for its access to cranes migrating from Siberia during the winter months. Farm stay personnel will accompany visitors as they experience the spectacular sight of around 10,000 cranes taking flight at dawn. Crane Park Izumi features exhibits and background information on these fascinating birds and provides clues as to why such a huge number of them choose to fly there in the winter months. 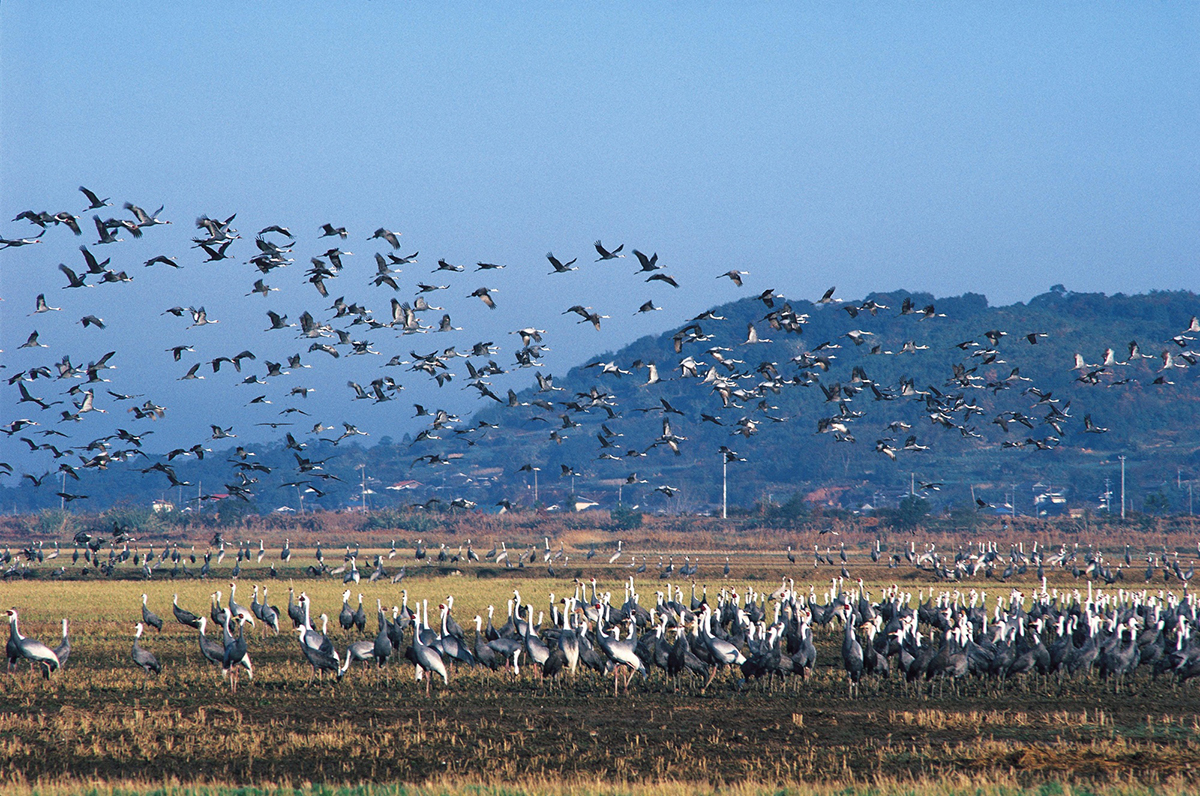 Izumi was once the seat of the powerful Satsuma samurai estate, which wielded enormous influence in Japan during the Edo-period (1603-1867). Around 150 buildings from that era have been carefully preserved; most are still lived in, and two are open to the public. The whole area retains an atmosphere of a time gone by - remarkable modern-day evidence of a period of Japan's history most people only know from novels or films.

Visitors can immerse themselves more fully in the period by dressing in a traditional kimono with the help of kimono professionals, and join a tea ceremony.

Japan will continue to offer these and other unique opportunities for overseas visitors who want to explore the country more deeply, understand more about its history and culture, and interact more closely with its people.