17 archaeological sites in Northern Japan were added to the list of UNESCO World Heritage Sites earlier this year - Japan's 20th such listing. They include the locations of former settlements in mountain ranges and coastal plains across the northern Tohoku region and the southern part of Hokkaido. Each site bears unique testimony to the pre-agricultural Jōmon culture in Japan, which developed from around the end of the last Ice Age, some 16,000 years ago, until around 300 BCE.

During this period, a time when humans in other parts of the world began leading settled lives centered on cultivation of the land, Japan was inhabited by people that still relied mostly on hunting, fishing and gathering. They are believed to have been united through a common Jōmon culture and spirituality, which reached a considerable degree of sophistication.

The name 'Jōmon,' meaning 'straw rope decoration,' refers to the patterns that were imprinted into earthenware and pottery of the period, generally accepted to be among the oldest in the world. The manufacture of pottery usually implies some form of non-nomadic lifestyle because it is heavy and fragile and thus generally unusable for hunter-gatherers. However, this does not seem to have been the case with the first Jōmon people; it seems that food sources were so abundant in the natural environment of the Japanese islands that large, semi-sedentary populations could be supported.

Jōmon people kneaded clay to create pottery in a variety of shapes and they learned how to make strong containers by applying heat, which made it possible to boil water and store food. This in turn enabled people to utilize natural resources more widely by boiling ingredients to soften and remove the bitter taste of tough plants. The creation of pottery thereby stabilized the diet of the Jōmon people. In the meantime they mastered skills as lacquering and basket weaving.

The Jōmon people lived in small communities in present-day Aomori, Akita, Iwate and Hokkaido prefectures, mainly in sunken pit dwellings situated near inland rivers or along coastlines. They used stone tools, traps and bows, and were evidently skilled fishermen. They kept dogs for hunting and even buried them after their death. Excavations suggest that by the end of the period they may have practiced an early form of land cultivation, by around which time a culture based on rice-growing had reached Japan from mainland Asia.

The complex spiritual culture of the Jōmon is apparent in stone circles and other ritual sites, with their graves and grave contents indicating that they sometimes formed stratified societies. Their daily activities, social structures and spiritual development indicate that they were quite advanced and complex hunter-gatherers. It was rare at the time to find this degree of culture and sophistication in a civilization based on the acquisition of food.

Many of the burial sites that have been discovered were constructed among beautiful greenery, often surrounded by gentle hills. Many historians see this as the early influence of - or perhaps the inspiration for - Japan's native Shintō religion, which emphasizes the connection between man and nature.

The newly-added World Heritage Sites include the sites of former settlements, often with reconstructed dwellings and other edifices, stone circles, and burial sites. Many of them have adjacent museums exhibiting locally excavated items, such as pottery, arrowheads and jewelry. Here are details of some of them.

Ofune, in Hokkaido, is the site of a large settlement dating back to the latter half of the Middle Jōmon period (approx. 3,200 - 2,000 BCE), and is located on a coastal terrace facing the Pacific Ocean. The site comprises a housing zone containing the remains of more than 100 pit dwellings, a large earthwork mound, and more than 100 graves. 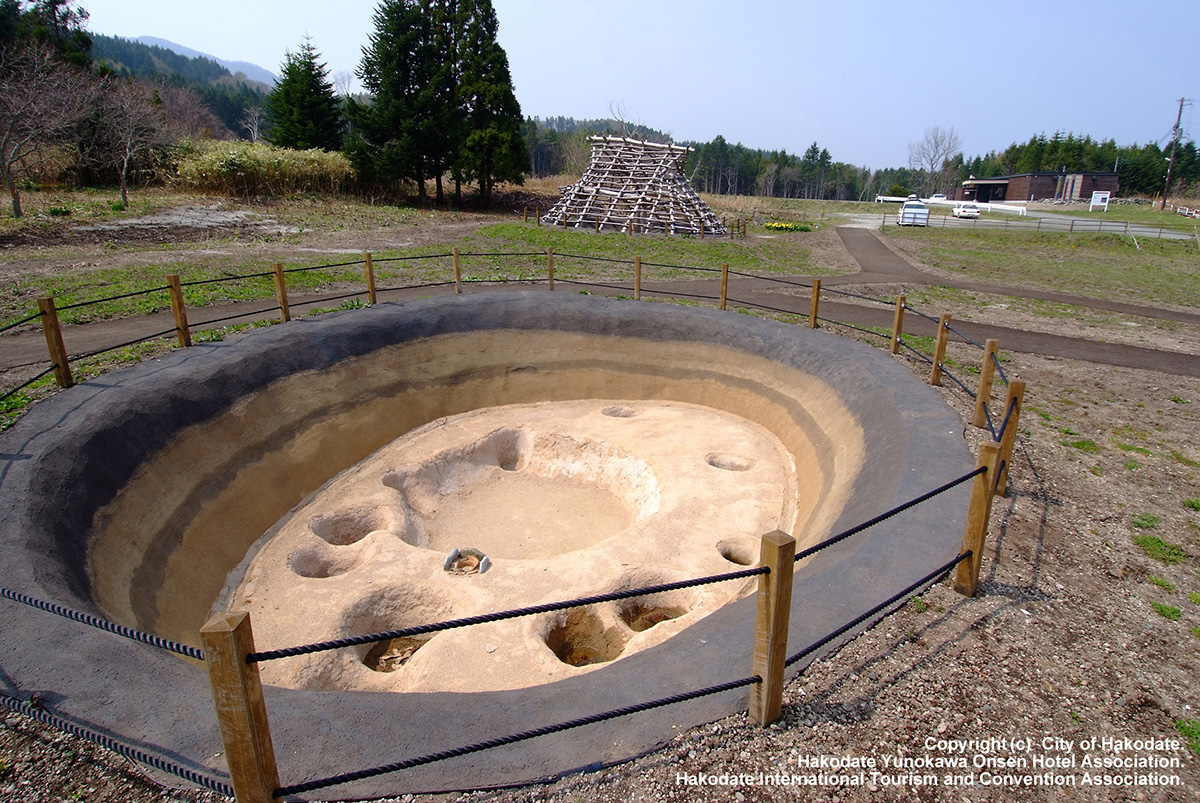 The Ofune settlement is believed to have thrived continuously for around 1,000 years, and is similar in structure to settlements discovered in northern Tohoku. Many of the pit dwelling remains have a large, deep structure, where the bones of whales and seals have been excavated.

Elsewhere in Hokkaido the Kakinoshima site contains the remains of a much longer-term settlement, one that lasted approximately 6,000 years from around 7,000 BCE. It includes remnants of the world's earliest lacquerware products, which were discovered in a pit grave on a site dating from the first half of the Initial Jōmon period, when the Jōmon people first began living in settlements. Many artifacts of that time have been excavated, including clay burial goods found in pit graves and various items of pottery, all indicating a relatively mature society and a rich spiritual culture. 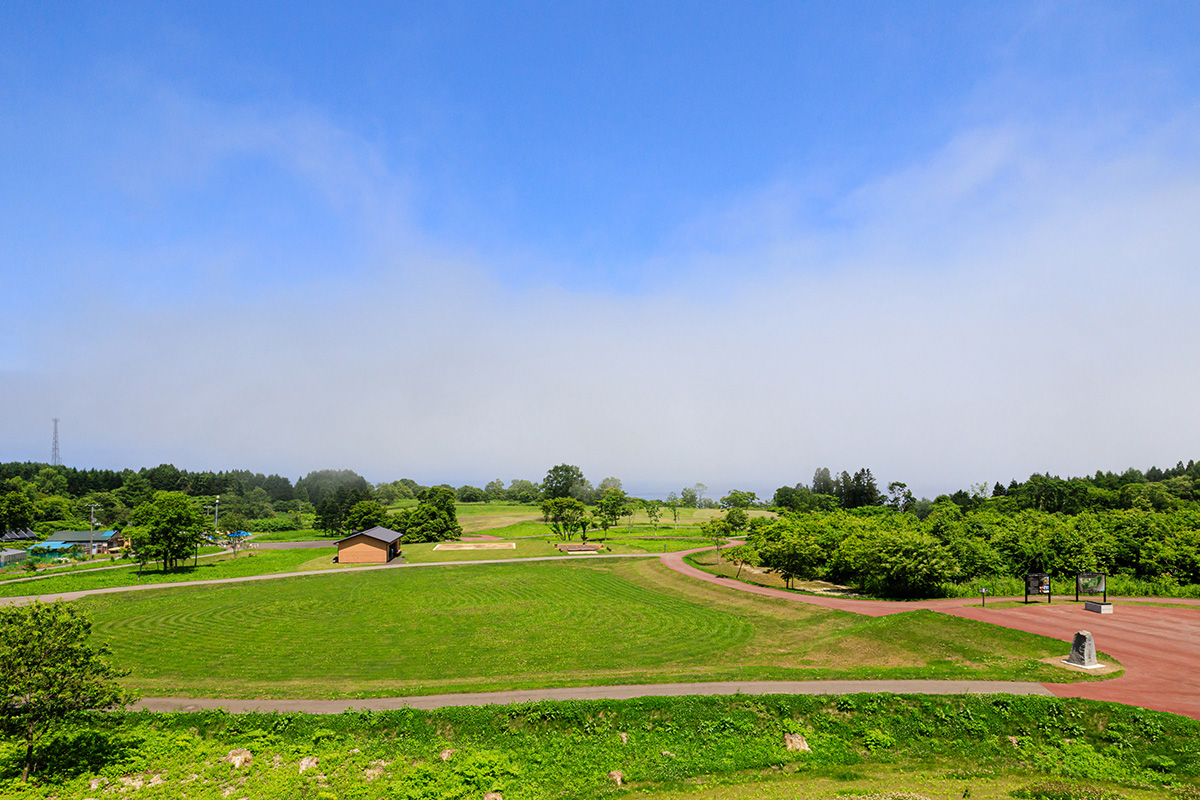 The Sannai Maruyama site in Aomori is the largest and one of the most complete and best-preserved Jōmon period villages in Japan. Unearthed by accident during a survey for the construction of a community baseball field, the site was revealed to have once housed over 700 structures and dwellings, including long houses, storage facilities and roads, as well as trash and burial pits. 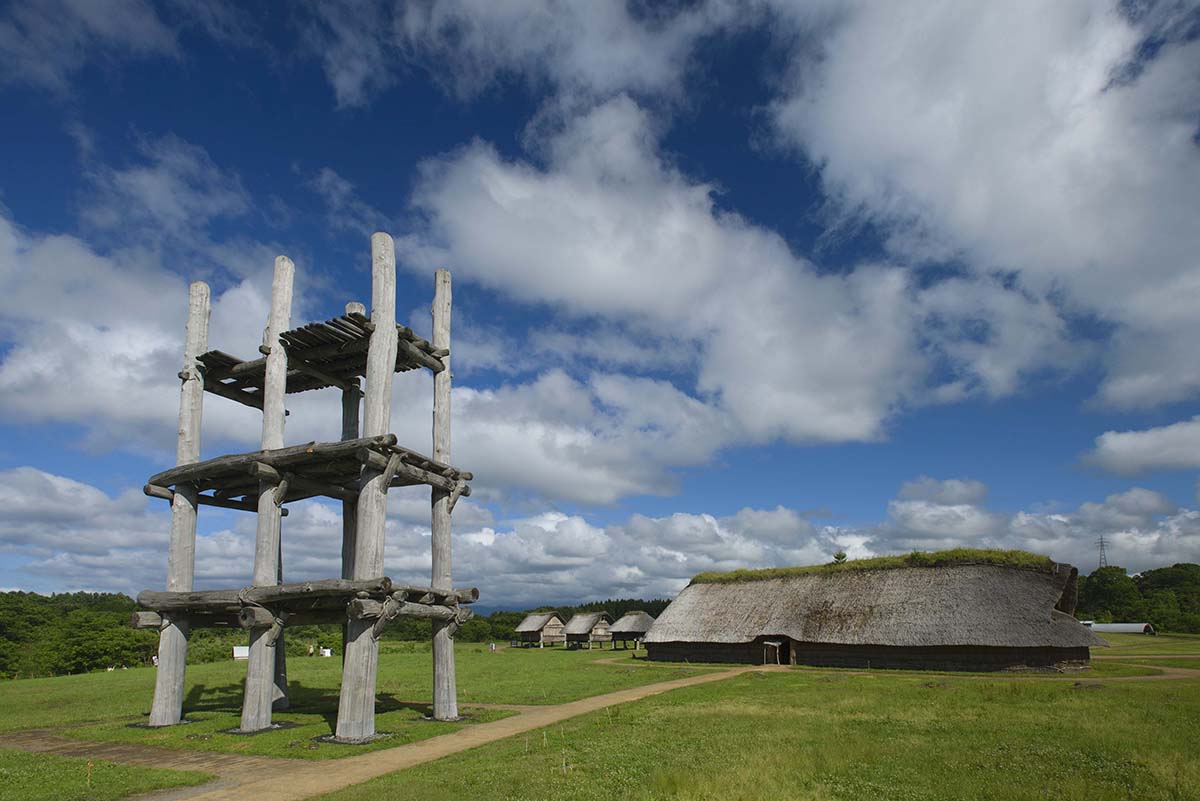 After the site had been excavated and studied, the settlement was reburied with earth and a number of reconstructed pit dwellings, long houses and a large tower were built on top. Visitors can enter these, some of which are quite large, as well as see a few of the original excavation sites around the grounds. They can also try on Jōmon period clothing, use tools of the era and try their hand at making handicrafts and toys. Typical food that the Sannai Maruyama villagers ate is served at a restaurant.

The Jōmon settlement in Goshono, Iwate prefecture, dates from the latter half of the Middle Jōmon period (approx. 2,500 - 2,000 BCE), and is located on a fluvial terrace on the east bank of the Mabechi River. At the center of the settlement was a graveyard with stone arrangements; it was encircled by pit dwellings, pillar-supported buildings and earthwork mounds related to rituals. The Goshino Site provides concrete evidence of stable, long-term human settlements, and indicates the systematic use of land in harmony with natural surroundings. 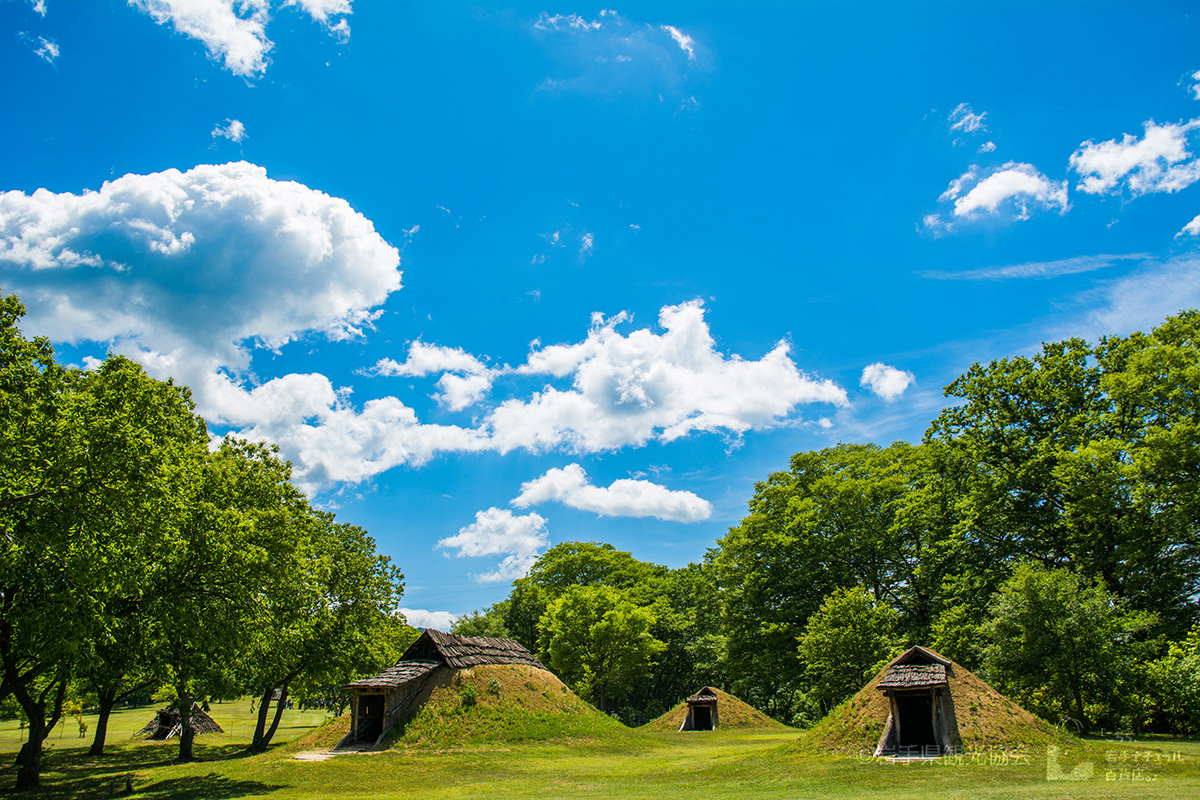 Several groups of pit graves are located on flattened land, and stone arrangements measuring 2 or 3 meters in diameter can be seen around the individual graves. The stone formations consist of two circular arrangements with a diameter of 30 to 40 meters encircled by pillar-supported buildings, creating a distinctive ritual space.

The significance and mystery of the Oyu Stone Circles in Akita Prefecture continue to intrigue, several thousand years after they were constructed. Like most stone circle monuments in Japan, they span a broad area, but the stones themselves are very low, meaning you should not bother visiting in winter as they will be covered with snow. 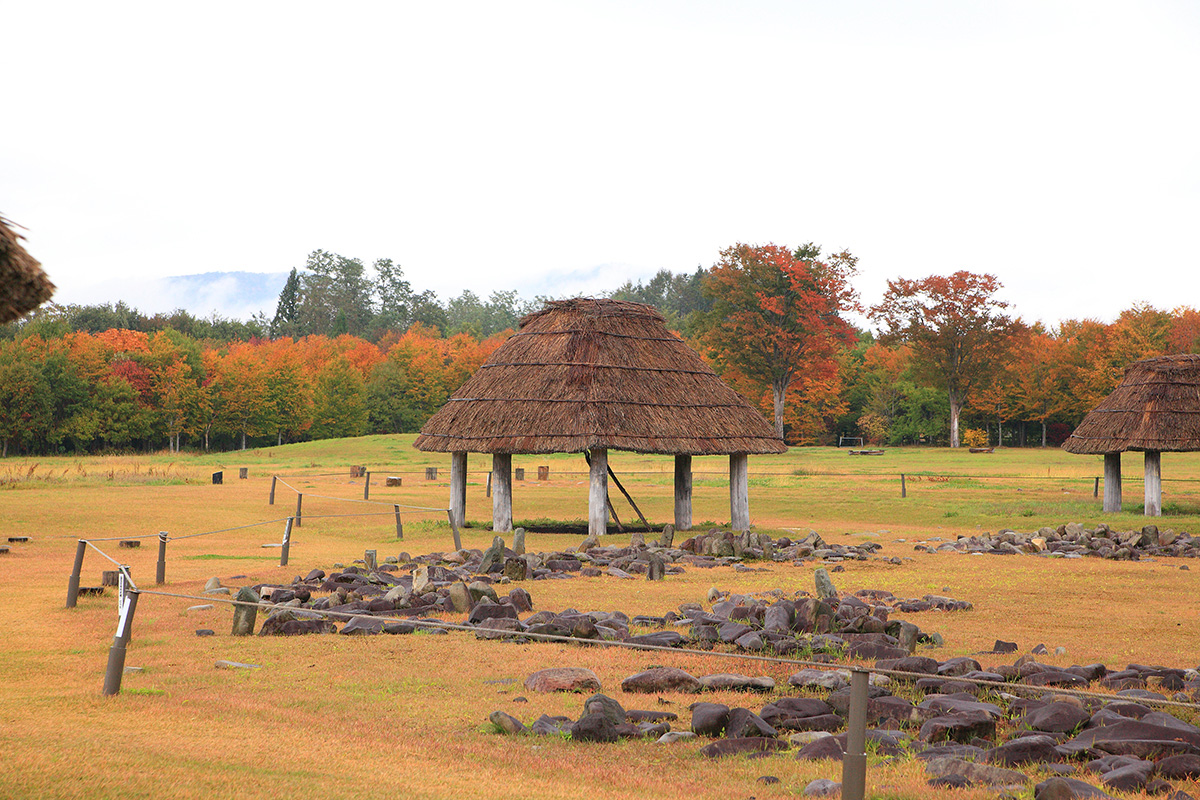 The two stone circles at the Oyu site are over 4,000 years old. Each circle has a central pillar with flat stones radiating from the center to form large circular sundial patterns which, viewed from above, resemble mosaics. The sundial formations suggest they were the scene of astrological events, while others see them as having been places of worship. In reality, the sites were probably used for multiple purposes by numerous Jōmon tribes over the centuries.

At a time when Japan is associated in the eyes of many with technology and modern urban lifestyles, the recognition of these historic sites reminds us of the significance and influence of the Jōmon culture. They all offer overseas visitors fascinating insights into this formative period of Japan's history.