The Positive Legacies of the Tokyo 2020 Olympic & Paralympic Games Expanded sports facilities, improved transport links, and a glimpse into the future

The Tokyo 2020 Olympic and Paralympic Games were like no other, thanks to the COVID-19 pandemic, which resulted in most events being hosted in near-empty stadiums and silent outdoor venues.

The Games might be over, but their legacy will be clearly visible to overseas visitors when global travel resumes and Japan once again welcomes tourists to its shores. It was always planned that way - that Tokyo's hosting of the Olympic and Paralympic Games would be about much more than a major sporting event.

From the time Tokyo was selected as host city, in 2013, the organizers made it clear they wanted the Games to be the catalyst for urban renewal in Tokyo. Despite the city's iconic neon illuminations and modern high-rise buildings, much of its infrastructure dated back to the time of the previous Tokyo Games, in 1964.

The organizers also declared that the Games should leave other more intangible legacies. These included encouraging more of Tokyo's citizens to take up sport, and making the city more accessible to those with limited mobility, such as the visually impaired or those in wheelchairs.

Understandably, some eyebrows were raised at the time. Many reasoned that Tokyo was already a developed city with many great facilities. Why build more?

In addition, the period immediately following the award of the Games to Tokyo saw growing awareness around the world of the need for sustainability and concern for the environment. In 2015 the United Nations adopted a series of Sustainable Development Goals, which included commitments to "sustainable cities" and "responsible consumption". At around the same time, the International Olympic Committee issued new guidelines for host cities, instructing them to make maximum use of existing venues and to minimize the impact of the Games on the environment.

As a result, construction of new venues for the Tokyo 2020 Games was minimized, and of a total 43 competition venues, just eight were built from scratch, each with a focus on social and environmental considerations and a legacy plan to ensure their long-term use after the Games. The new Tokyo Aquatics Centre, for example, incorporates state-of-the-art technology allowing the length and depth of its pools to be adjusted by moving floors and walls. Reflecting Tokyo 2020's commitment to sustainability, it is powered by solar energy and a ground heat.

25 of the venues were existing facilities-five of them iconic structures originally built for the 1964 Games-with the remainder erected as temporary structures.

In cooperation with the Games organizers, the Tokyo Metropolitan Government is now looking at ways to ensure that the city's hosting of the Games will bring lasting benefits to the residents of the city beyond just the creation of new sports venues and facilities. The outcome of their discussions was a commitment to use the Games as a catalyst for the deployment of new technology that would help make urban environments more sustainable and more accessible.

Much of this was subsequently showcased in a new urban development called Harumi Flag, a regenerated 32-acre site originally built on reclaimed land in Tokyo Bay. During the Games it was used as the Olympic Village housing the athletes; it is now being converted for use as a residential complex that will be maintained jointly by the private and public sectors. 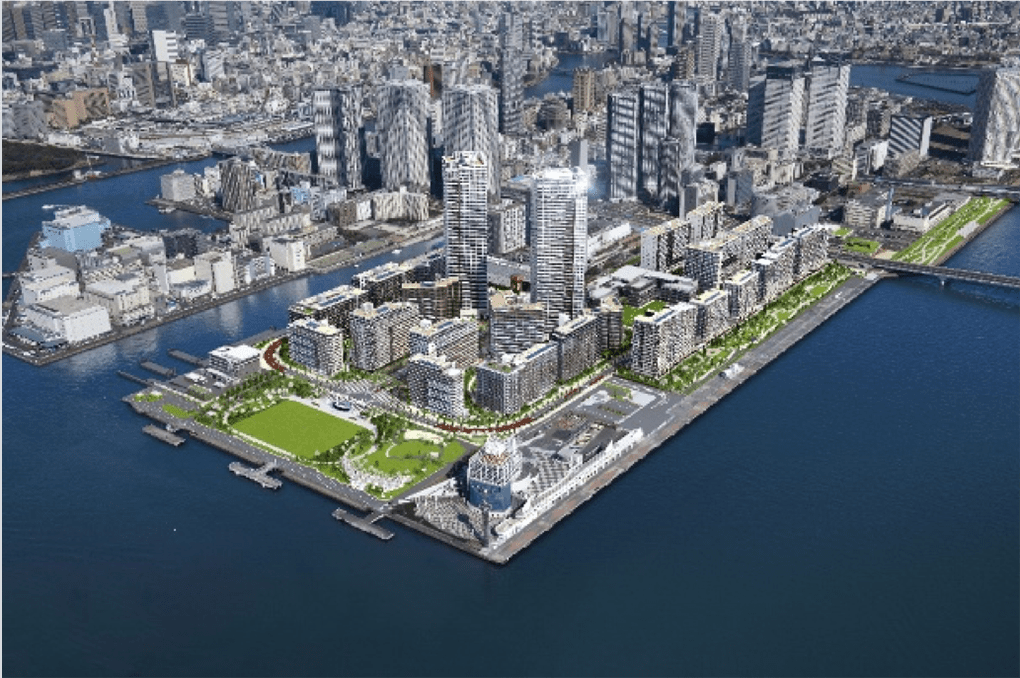 Harumi Flag contains housing complexes and commercial facilities including daycare centers and welfare facilities for the elderly, and is designed to be barrier-free. It will eventually be home to a population of around 12,000 and accommodate a diverse range of lifestyles. The layout incorporates a huge central plaza and other common areas to encourage interaction among residents of all ages. Barrier-free walkways and large, accessible common hallways facilitate access for all.

The city-within-a-city has also been designed to be a sustainable and environmentally friendly town, the first in Japan to be supplied with hydrogen via pipeline from a hydrogen station on an adjacent site. The hydrogen will be used to power fuel cell buses and other vehicles. Extensive use is made of solar energy. Overseas visitors to Tokyo will be able to glimpse the future when they visit this corner of Tokyo. 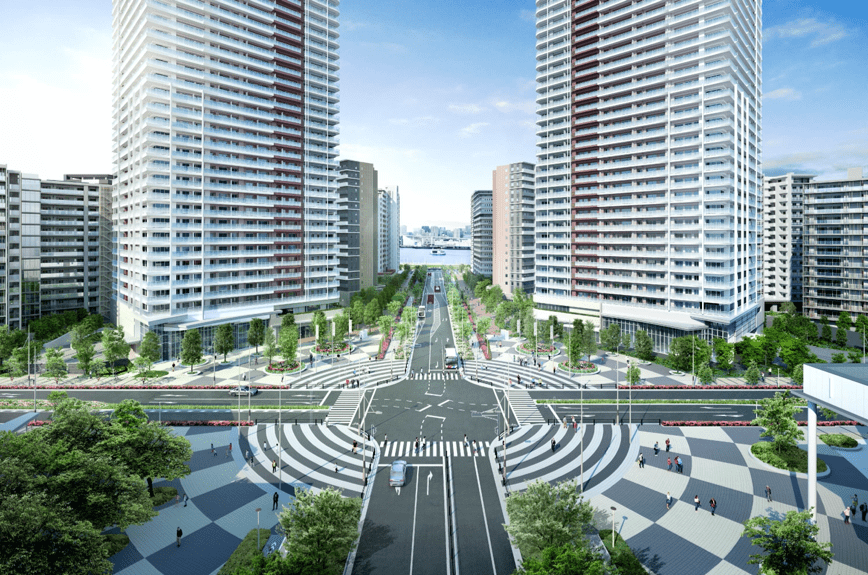 Another aspect of the Tokyo 2020 legacy will be improved sporting facilities for the city's residents - and, of course, for sports fans visiting from overseas. The newly-constructed venues in the Tokyo Bay area will offer opportunities for swimming, as well as canoeing, archery, sailing, hockey, running, tennis, rugby, rowing and many more. The Tokyo Government has set a target of having 70% of the city's residents practising sport at least once a week - including the elderly as well as people with impairments.

As an example, one of the eight new venues created for the Tokyo 2020 Games is the Sea Forest Waterway, built on reclaimed land in Tokyo Bay and featuring boating and canoeing arenas. After the Games, the course will host international rowing and canoe competitions; to further cement its legacy it will be open to the public as a unique recreational area against a superb backdrop of the Tokyo skyline. 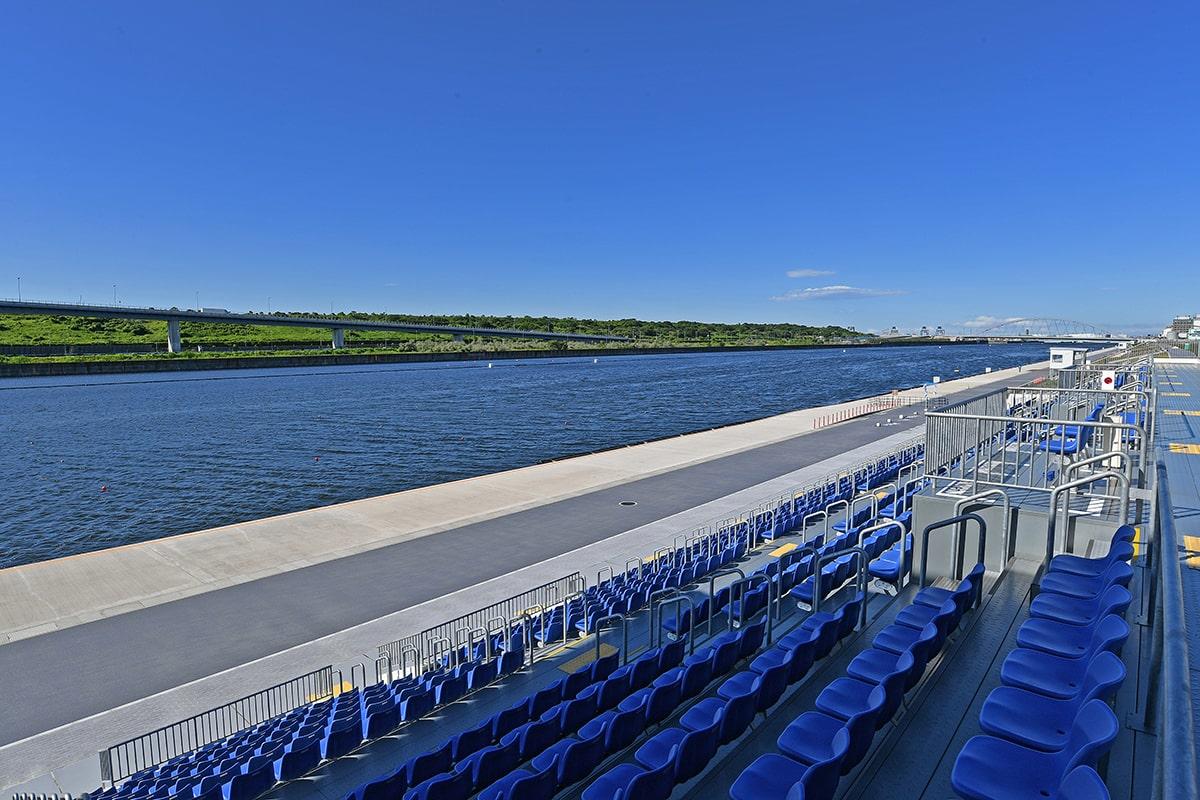 Overseas visitors returning to Tokyo will also appreciate the city's improved access and transportation links. Spurred in part by preparations to host the Olympics and Paralympics, roads and sidewalks in the vicinity of many of the Games' venues have been widened, and barrier-free access has been provided at a number of key subway and mainline stations. More English-language signage has been provided in public areas, and there are smartphone translation apps available to help visitors communicate directly with store assistants and taxi drivers.

Outside of Tokyo, the Games have inspired many of Japan's other urban centers to focus on diversity and on sustainable development. The city of Hamamatsu, around 260 kilometers south-west of Tokyo, is home to a large foreign resident community, many of them Brazilians employed in the local manufacturing sector. In 2018, with the build-up to the Games in full swing, it was selected as an "SDG Future City" by the Japanese government in recognition of its diversity and its many initiatives to promote sustainable living. 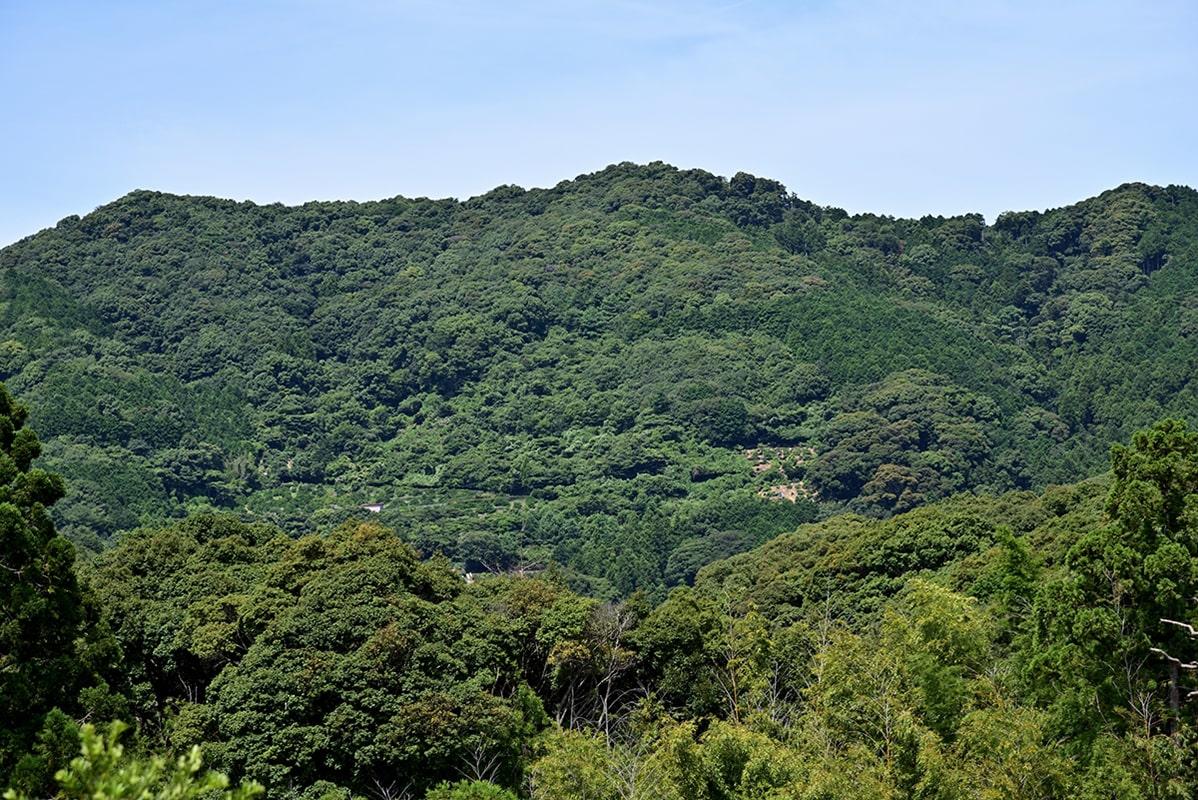 These include programs aimed at nurturing a multicultural society with special focus on the needs of foreign-born children and on encouraging non-Japanese residents to participate in community activities. The city is also promoting sustainable forest management and pursuing a strategy of "green resilience" that balances industrial development with a need for forest conservation. In short, Hamamatsu is a city embodying the Tokyo 2020 ideals of diversity and sustainability, and it's just a 90-minute bullet train ride from the capital.

With enhanced sporting and cultural facilities, and with major improvements to its transport infrastructure, Japan is looking forward to welcoming a new generation of overseas visitors. And Tokyo's focus on sustainability and diversity, inspired by the city's hosting of the Olympic and Paralympic Games, promises to make their stay more comfortable and enjoyable than ever!