Following the recent lifting of most of Japan's inbound travel restrictions, overseas visitors are returning to the country in increasing numbers. Repeat visitors will be looking for experiences beyond the well-trodden tourist paths, with many of them seeking opportunities to explore some of Japan's many regional cultures.

This aligns well with the government's plans to promote tourism in Japan's regions and thereby help boost their economies. In this newsletter edition, we'd like to introduce three areas where you can immerse yourself in the local culture.

Tokushima is the capital city of Tokushima prefecture, on the northeastern coast of Shikoku, the smallest of Japan's four main islands. It has historical links to nearby Osaka and the Kansai region which were boosted with the opening in 1988 of the impressive 3.9km Akashi Kaikyo Bridge linking Honshu and Shikoku.

Tokushima is famous for its hosting of historical puppet shows based on dramatic events, such as love-suicides, in the lives of people in the Edo period. Another genre tells the stories of warriors and aristocrats in even earlier times. One of these shows is the Awa no Naruto, a collaboration between five local writers based on fictional events set in Awa, the original name for Tokushima. It is performed outdoors in a natural setting by members of the community.

This joruri--a dramatic recitation accompanied by shamisen three-stringed instruments--depicts the love of parents for their children and is set in the Edo period. This is one of the most popular and frequently performed puppet plays in Tokushima because the characters are based on typical local residents.
There is in addition an exhibition containing displays highlighting the art of puppet making, and showing how the puppet's elegant costumes are created. 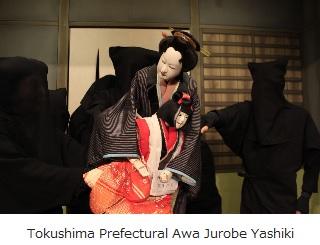 Directly north of Tokushima near the Sea of Japan coast lies the city of Toyooka in Hyogo prefecture. Located in an onsen (hot-spring) district of the city, the Kinosaki International Arts Center is a residential facility designed to promote the performing arts. Inaugurated in 2014 following the renovation of a former convention hall on the site, the center comprises a main hall, six studios and a residence facility able to accommodate around 20 artists at work.

Throughout the year, the center offers an Artist-in-Residence program for artists and companies selected from among applicants to the annual open call. Artists can stay at the center at no charge for up to three months and are able to access its facilities 24 hours a day.

The mission of the center is to create an environment where the local community can access and enjoy diverse artistic achievements. These include trial performances and presentations by the resident artists that are open to visitors.

In recent years the Center has produced and presented two or three artistic or theatrical performances annually. During the Toyooka Theater Festival 2022 in September this year, participating artists were invited to meet with tourists and other artists at the Center; they discussed with them how creating and staging performances for unknown audiences in an environment much removed from their daily lives had influenced them and their work. 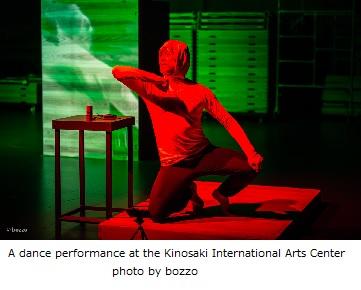 Further east, at the northeastern edge of the Izu peninsula, lies the city of Atami, facing Sagami Bay. Its accessibility from Tokyo (just 45 minutes by bullet train) and proximity to Mount Fuji make it a favorite weekend resort for Tokyoites. Atami has long been famous for its hot springs, and the city now aims to encourage visitors to visit its many cultural and other attractions as well as enjoying a relaxing stay in one of its hot spring resorts.

Located on a hilltop offering great views across the bay is Atami's MOA Museum of Art, which opened in 1982 and recently refurbished its many galleries and amenities. Its new design cleverly blends centuries-old materials and building techniques with modern architecture. The museum's mission is to "provide a platform for introducing Japanese culture to the world," and it is committed to partnering with the local community and schools to achieve this aim.

The museum's collection comprises a wide range of historical works of art from Japan, China and other Asian countries, each exemplary of a significant epoch in the history of art in Japan. They include paintings, calligraphy, sculptures, and centuries-old handicrafts. The museum also stages events that can be enjoyed by those with no understanding of Japanese, including spectacular autumn leaves illuminations and orchestral performances.

These are just some examples of the amazing variety of artistic and cultural displays and events in Japan awaiting those prepared to explore areas away from traditional tourist destinations. We are looking forward to welcoming first-time visitors to this amazing country and to welcoming back those returning for a closer look at Japan!

If you'd like to download photos and videos of Japan's tourist attractions, please visit the Japan Online Media Center (JOMC).

For media inquiries, including requests to use photographs, please contact the JNTO Press office at
media_inquiry@jnto.go.jp