Getting a real taste of Japan through gastronomy tourism

Most visitors to a foreign country enjoy sampling the local cuisine while visiting its tourist attractions. But for many travelers, the food itself is increasingly becoming the main attraction, and Japan is no exception!

Gastronomy tourism, as it's called, is not a new concept. But these days it goes beyond the enjoyment of authentic or innovative meals; increasingly, gastronomy programs include activities such as visiting local farmers and producers, attending cooking classes, and participating in food festivals.

Domestic gastronomy tourism has a surprisingly long history in Japan. Guidebooks listing recommended places to eat across the country were already being published during the Edo period (1603-1868).

Individual towns and entire regions in Japan are often associated with their specific food and drink offerings. If someone mentions they've visited Fukuoka, in Kyushu, their friends might ask, "Oh, did you try their tonkotsu ramen?" Mentioning that you've recently been to Osaka will typically elicit comments about the city's famous okonomiyaki savory pancakes.

In the meantime the government is promoting gastronomy tourism as a means of encouraging overseas tourists back to Japan now that most of the country's border restrictions have been lifted. The aim is also to help support regional communities by encouraging visitors to go beyond the well-trodden tourist paths.

Here are just three examples of new gastronomy experiences on offer in Japan.

The city of Miyakonojo, in Kyushu's Miyazaki prefecture, is Japan's top producer of beef, pork and chicken in revenue terms; it is also home to the country's premier producer of the traditional Japanese spirits shochu. Shochu is distilled mostly from grains or vegetables, and some versions use a type of yeast known as koji, which is also used in the brewing of sake. Japan has proposed traditional Japanese sake brewing techniques using koji mold for UNESCO intangible cultural heritage listing.

Miyakonojo's shochu is made from sweet potatoes, rice or barley grown in southern Kyushu's warm climate using clear water from underground streams. A traditional hearty meal here typically includes slices of top-quality Japanese beef washed down with the local shochu. The city authorities have launched a "Meat Meet" program providing details of recommended local restaurants and offering special packages combining accommodation and dining options in the area. It includes a "Meat & Sakagura Tourism" initiative aimed, it says, at "those who love meat and shochu, as well as craft beer and Japanese wine." 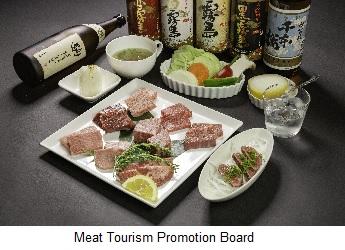 Several establishments are participating in the initiative. One of them, Kirishima Shuzo, has been producing shochu since 1924, and the original company building is today used to host "Meet x Sake Brewery" promotional events. The classic design and atmosphere of the building, typical of merchant houses in the period, have been remarkably well preserved, and its dining hall is now offering special dining opportunities. The menu includes fresh local produce, including top-quality meat, complimented by Japan's best-selling shochu produced at our own distillery.

Nestling in the mountains of Akita prefecture in northern Honshu and surrounded by lush forest is the town of Odate. It offers visitors a unique style of gastronomy tourism--farm stays--that allow them to experience a day in the life of host farming families. Activities include tending to rice fields in the summer, pickling vegetables or harvesting apples in the autumn, and, for the more energetic, clearing snow off roofs in the winter. 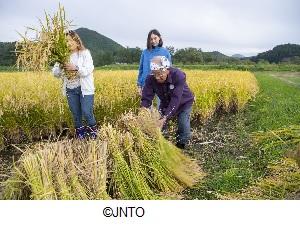 After a busy day, guests huddle around a piping hot stove and learn how to make kiritanpo-nabe stew or delicious tanpo rice skewers, both local specialties. Which, of course, they subsequently get to enjoy eating! Host families will readily recommend other local attractions, including the area's many hot springs.

Nara prefecture's oldest soy sauce brewery, Maruto, was founded in 1689; it closed its doors in the wake of food shortages following World War 2, but re-opened in 2020 as a functioning brewery called the NIPPONIA Tawaramoto Maruto Shoyu offering overnight accommodation. Its 130-year-old warehouse, built in a traditional local architectural style, has been converted into seven comfortable guest rooms that take guests back in time. 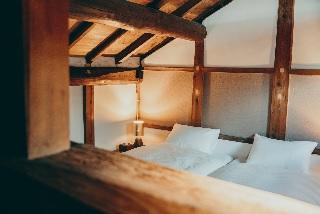 Soy sauce, a fermented product, is a familiar ingredient in Japanese menus and an important feature of Japanese food culture. Maruto's delicious soy sauce is made with seasonal local ingredients and it naturally features in the dishes offered in its restaurant. Guests may also try their hand at soy sauce brewing during their stay, and various excursions are offered that allow them to experience the history of the surrounding area, including the town of Tawaramoto, said to have been the birthplace of Noh traditional theater.

Japan's gastronomy tourism potential is garnering global attention. The World Tourism Organization (UNWTO) will hold its next World Forum on Gastronomy Tourism in Nara in December 2022. The Forum will offer a unique opportunity for experts in the growing field of gastronomy tourism from around the world to share new ideas and best practices - and to learn first-hand about Japan's own offerings.

A new Gastronomy Index website has just been launched, providing links to websites featuring many of Japan's best-known--and lesser-known--culinary attractions.
Come to Japan soon and get a real taste of the country!

If you'd like to download photos and videos of Japan's tourist attractions, please visit the Japan Online Media Center (JOMC).